Time on the Road (this trip or general outline): I first started travelling back in 2009, but have spent some time back in England between trips to recover savings.

What initially inspired you to travel?

Since a young age I had always wanted to travel so that I could challenge myself in completely new corners of the world. I had never really pushed myself out of my comfort zone before. When a long term relationship came to an end  I decided I should take the opportunity to get myself out there and see the world. I saved every penny I could and headed for Australia first, where I combined some travelling and exploring with a bit of work, which included fruit picking.

How have your inspirations to explore the world changed since you began travelling?

Travelling quickly proved a lot more fun than I had ever expected. My family seemed very proud of me for gaining this new independence which gave me a real confidence boost. Meeting so many inspiring people on my travels definitely opened my eyes to new things and I started to feel that I my life was becoming much richer in terms of my general ideas and attitudes. I wanted to inspire other people to travel too. 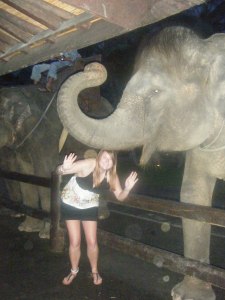 What has been your most memorable experience abroad?

There have been so many but I would say my most memorable would be travelling Route 66 across America with my best friend! On one day we were shopping in Chicago, the next we were watching a Baseball game in St Louis, then had fun writing on upside down Cadillacs in Amarillo. We drove through the wildlife parks of Arizona, rode horses in the Grand Canyon, gambled away in Vegas before relaxing LA and finally reaching our final destination: Santa Monica in California! Everyday was so different and we were able to see so many different American states in such a relatively short time. 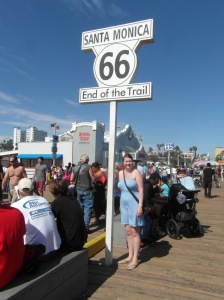 What would you say has been your most difficult or testing experience whilst travelling?

When I was in Australia I worked on a fruit picking site. The first day was so hard; planting melon seeds all day in the blistering Australian heat was really tough and I was sure that I wouldn’t last until the end of the week! However, six months on and I was saying goodbye to the ranch. I had learnt so much and made some very good friends there. There are some situations you face while travelling that seem impossible, but if you try to stay positive and persevere, you will often find these the most rewarding experiences.

Where are you right now?

I am in Kentucky, USA. I’m working as a nanny; looking after two twin girls and a four year old boy.

Do you have any survival advice for new travellers in this country?

Don’t be afraid to ask the locals for help and advice on anything.  I am finding the local people here extremely friendly and helpful, much more so than I was expecting!

If you had to recommend one place in the world to visit, where would it be?

Monkey Mia in Australia.  It is a small resort 10 hours north of Perth, I worked in the restaurant there and it overlooked the beach. Dolphins would often swim to the shore and in the mornings they would be fed by the conservation staff, who would also invite members of the public to help feed them! It’s a  great opportunity to see some beautiful Australian landscape and get really close to wildlife.

Where do you plan to visit next?

There are so many places I want to visit including Asia, but right now I plan on applying for Camp America next year.