Time on the Road (this trip or general outline):

In some places abroad I was working (eg: Greece, Sweden, South Korea, England), but sometimes I was travelling on savings (eg: the Middle East, South East Asia and some European trips.

A visit to Damascus, Syria

What initially inspired you to travel?

A love of learning about new cultures, a curiosity about the world and the call of the wild. That and food.

How have your inspirations to explore the world changed since you began travelling?

I think I used to enjoy shorter trips to more places, whereas now I enjoy spending more time in a country and getting to know it better by working there.

What has been your most memorable experience abroad?

Too many. I would say going to South Africa when I was 19 opened my eyes to how wonderful travel could be outside of my comfort zone. At the time I was young, had only been to Europe and North America and it was a stretch for me.

As far as a memorable experience go, I could say Palmyra, Syria, the most beautiful Roman ruins I’ve ever seen. Sadly, I believe the war has affected them. That and fulfilling a life long childhood dream of seeing the Angkor temples in Cambodia and the Luxor temples in Egypt.

My sister and me at the Pyramids of Giza, Cairo, Egypt.

What would you say has been your most difficult or testing experience whilst travelling?

A string of horrible things happened in Budapest. I got fined for an improperly validated subway ticket, I got bed bugs, a machine ate my ATM card, and I had some horrible experiences with men. That made me question why I travel at all. While I love many aspects of India and would return in a heart beat, I would say it is a challenging place to be a traveller, especially as a woman. It is exhausting to deal with the sexual harassment and scams in India, but I could say the same thing of Turkey and Egypt. There isn’t an experience or country visited that I would take back, however. I enjoy many aspects of all of those countries’ cultures.

Where are you right now?

San Francisco, California! And loving it.

Do you have any survival advice for new travellers in this country?

Don’t forget to eat and drink enough water! I forgot this often at times during my first Asia trip, which was three months around Cambodia, Thailand and India. I lost a lot of weight and I think the worst times on the trip were related to me not taking care of myself enough. Basically, be kind to your body, take care of yourself and you’ll be in better spirits to enjoy the trip more! That – and don’t be afraid. You will survive.

A walk through Chefchaouen, Morocco

If you had to recommend one place in the world to visit, where would it be?

This is hard. I would say the Mid east, particularly Syria, but I was fortunate enough to go before the Arab spring. Syria was a really special place when I visited, a magical place with castles and temples from my childhood imagination, and an honest kindness from the people that I haven’t experienced anywhere else.

Otherwise, I would say California. I’m endlessly delighted by the diversity of cultures, people and landscape. Well, also Morocco has a rich culture of art and design, as does India, as does Czech Republic, as does Mexico… I’ve loved many places!

Where do you plan to visit next?

Iceland! I’m doing an artist residency there in June 2014. 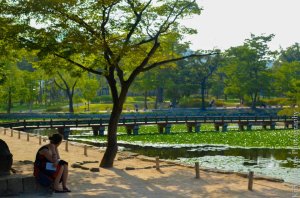 You can stay up to date with Chelsea via her current blog: http://chelseaelizabethsmith.tumblr.com/